Fattet Makdoos is a very popular dish in Levantine cuisine.

Fatteh in general is a term given to a dish that is usually layered and at the base is always bread. Coming from the Arabic term “futt Khobez” meaning breaking bread into smaller pieces. 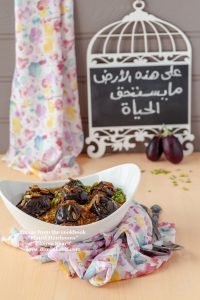 Every Fatteh will always include: a layer made out of bread (Pita or Taboon) broken into smaller pieces, then fried or toasted, used as a first layer. Then depending the type of Fatteh, the layers would include a sauce (usually two), some vegetables and meats. always garnished with pine nuts and very often parsley too. The sauces are usually yogurt, tahini and/ or tomato sauce. Either individually used or mixed depending the Fatteh you are making. Among the very popular vegetables used for this are eggplants, green fava beans, cauliflower, Kusa or chickpeas… The meats are usually either chicken or red meat and sometimes it could be fish.

Fatteh is a very delicious starter, in most menus it is served as a starter, especially famous in Ramadan. Fattet Hummus is also a very popular breakfast item, especially on weekends. This delicious appetiser can also be served as a main meal, especially in the case of Fattet Djaj for instance, as the inclusion of rice here makes it a more filling option and the pulled chicken makes it a more substantial meal. Another example of a main meal Fatteh would be Fattet Mloukhieh, where a layer of bread is toped with a layer of rice, then topped with Mloukhieh and layered pulled chicken. This is usually the dish served the second day, using leftovers of Mloukhieh cooked the previous day.

Regardless the type of Fatteh, being an appetiser or main meal, Fatteh is a really delicious mix of foods and no wonder it is a favorite across the whole area of the Levant and an integral part of the area’s shared Levantine cuisine. Therefore, it had to make it to my Ramadan Special 2019. Today I have chosen the glorious Fattet Makdoos as the main focus.

To remind you, this is what I have set out to explore this Ramadan:

the different countries in the Levant cook almost identical food. While each country does have its unique foods and dishes that are known for it, we do share the vast majority of the food. Through the research I have done so far and through the years I have come to learn that sometimes each country will have a different name for the dish, yet the method is absolutely identical, and at times we may have the same exact names yet the application could not be more different. Then we have dishes that are named the same and cooked the same.. This can actually be very confusing to those who are foreign to Levantine cuisine and also it so happens to be confusing to people very familiar with their local cuisines, yet unfamiliar with the cuisines of their neighboring Levantine countries… On the other hand, so often I read on blogs and social media comments that dismiss a post or recipe as “this is not how it is done” or “this is not this food” where the comment is simply because there is lack of awareness about this. Therefore, I thought that this is actually a very interesting conversation to have and a chance to spread awareness about this area’s beautiful cuisine and it’s local variations. So for Ramadan this year I am inviting all of you to take part in this on your blogs, and social media and share with us your experiences and knowledge … so …

So as announced last week, I am exploring 5 very popular and shared Levantine dishes with my Syrian friend Omaya, where she and I are comparing the Palestinian and Syrian way of preparing these dishes.

Watch the video of the two methods..

Having cooked this dish with Omayah I have come to learn that the Syrian and Palestinian ways of making Fattet Makdoos are almost identical. The main differences are in the quantity of Tahini used and the fact that Syrians would use Labneh instead of yogurt in making the sauce (a fact that I never knew before). It turns out the Palestinian way uses a substantially bigger amount of Tahini in the yogurt sauce than the Syrian way which uses 1-2 tbsp. Also the Palestinian way would mix in parsley with the Tahini sauce, while the Syrian way does not use parsley at all. Also the traditional Palestinian recipe wets the bread slightly more than the Syrian crunchier version for this recipe that is mainly because yogurt is a wetter ingredient than Labneh, and also through the addition of broth in the Palestinian way. That is it!

You see, it is fascinating to me how much we share in this area, and how minimal the differences are, which do not change the recipe at all, just more like a difference that can be attributed to personal preference. This leads me to think that this food when moving from area to another is in fact based on the very same recipe, just tweaked here and there according to the cook’s preference.

In case you were wondering about the difference between Fattet Beitinjan and Fattet Makdoos (as both include eggplants), Fattet Makdoos is the one that uses whole baby eggplants stuffed with classic minced meat filling. Fattet Makdoos also includes the use of Tahini. While Fattet Beitinjan is a very similar concoction, where the eggplants are diced and fried instead of cored and stuffed, and in the Palestinian version does not include the tahini in the yogurt sauce here, rather a garlic infused yogurt sauce is made for this. The meat stuffing that would have made it into the baby eggplants is instead spread on top. Does this sound to you like another case of the cook’s personal preference? Perhaps to reduce work (no coring and stuffing then frying, rather dicing and frying instead)? It does save time! Also could that cook have been not very into tahini?

These questions are how we start exploring cuisine, and then in answering these questions we discover how the cuisines are built. a very small variation to the recipe had produced 2 very different Fatteh options. The two versions become an essential part of the larger cuisine separately celebrated as two very different preparations. What such differences can we make today to produce a brand new Fatteh dish to become part of Modern Levantine cuisine? you never know; what we make today and look at as a variation, may very well become tomorrow’s classic dish in this larger cuisine.

This is why I am also inviting you to share with me your way, and how your area prepares this dish? Do you know any stories about this Fatteh, or Fatteh in general that the generations receive from older cooks? Something like: where the dish comes from? How it became known? How the different areas prepare them? Do share wit me, I love to learn this stuff and hear your thoughts so I can form a broader picture and perhaps eventually learn the origin of these foods. Also what do you think will be the makings of Modern Levantine Cuisine?

Look forward to hearing your thoughts..