Jordan has so much to offer!

There is historical sites, such as Petra, the many Roman Amphitheatres, Jericho, Al Maghtas (baptism Site, Bethany – Jordan River) and everything in between. There is Nature at its most beautiful, such as the deserts of the south, which house the magical mountains of Wadi Rum very closely located to Aqaba, the city by the beautiful and rich Red Sea. There are the water springs of Ma’ine, the greenery of the north and all that you can think of in terms of natural beauty.

Jordan is a must visit, if you haven’t already! It is beautiful, with lots to offer.

When in Jordan though, one thing you must never miss out on is a good Mansaf! Mansaf is the heart of the Jordanian cuisine, but also it is at the heart of Jordanian culture and hospitality. Mansaf is basically a stew of meat cooked in fermented goat’s milk, that is very uniquely delicious. If you have not tried it before and would like to give it a go, or if you have tried it but live away from Jordan, or if you would like to learn more about Mansaf, this is the post with all the info, so read on…

Since Mansaf to the Jordanians is more than just food to fill your stomach, and more of a piece of history, culture, hospitality and lifestyle – Mansaf in Jordan is a Social Tradition – I, therefore, cannot tap into this delicious dish, without a bit of a background…

The Mansaf that we know today 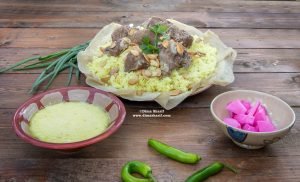 is inspired and based on the Saudi Arabian Bedouin dish “Thereed”. Thereed is essentially a dish made out of meat, broth and bread. The whole area was inhabited by Bedouins and as they happen to be living in the desert, they kept on moving in search for water and shelter from the harsh weather conditions in the different seasons. These relocation have carried with them the Bedouin’s food and traditions to the new areas.

The early Jordanian Bedouins ate Thereed as their main food, of course as being a desert the food was limited to that environment’s produce. As Jordan started becoming an agricultural country, and being influenced by the peasants and the cultures of the migrating neighbours and later also the dislocated neighbours, the country’s produce started growing in number and kind. Consequently, the Jordanian Bedouins started introducing new produce into their food, such as rice, wheat, Bulgur as well as yogurt. Which eventually went into their main food preparation and evolved the originally Thereed into what is now known as Mansaf.

The making of Mansaf, starts well before the actual cooking.

Making the Jameed (fermented yoghurt, from which Mansaf is made) is the first step. Jameed balls, are bought from local stores, and some speciality stores. In Jordan they are always bought from the source: the Bedouins making it. Nowadays, there is a modern version of Jameed that comes in carton containers, already liquified, but they are nowhere near the goodness of the original dried Jameed balls.

If you live in the UAE, you can buy my gorgeous, artisanal “DS Jameed Balls” here. These are small batch, made by a Bedouin artisan that I have sourced myself and are extremely superior quality Jameed.

Here is a quick run through how Jameed is made.

Jameed is made out of milk. The milk can vary from maker to another and sometimes from area to another, and so does the quality. The best quality Jameed is made out of Goat’s Milk. The Karaki Jameed (Coming from Karak) is famous to be the best in Jordan. The Goat’s milk is put in a container to change from milk to yogurt. It is then placed in a sack (originally made from goats’ skin) and shaken to separate the milk solids from liquids.

In the old days, a Bedouin lady would sit and shake the milk till ready, but nowadays there are machines that carry out this step.

The butter (milk solid) will then be taken and made into local ghee (Samen Baladi), which is later on used in the cooking of Mansaf.

The remaining Soured Milk (liquids) is then heated to separate further. The whole separated mixture is then placed in a large cloth (kind of like a cheese cloth technique) to completely drain out all the remaining liquid. There will only remain the Jabjab, which is the hard solid part. This is then mixed with salt, and left for a further 24 hours in the cloth to dry.

Then it is taken out of the cloth, and pressed together and shaped into balls, which are then left to sun-dry for 2-3 days.

These Jameed balls will then be rock hard, and the name (literally meaning “solid”) is reflective of their dry solid state. These Jameed Balls can be stored for about a year, which is very convenient for desert life, as they had no access to refrigeration and other storage options. Then when ready to cook, the Jameed is rehydrated, by being broken up, soaked in water and rubbed to go back into liquid state. It is then added to meat and broth, creating a yoghurt-based sauce, the actual mansaf.

Drawn mainly from Bedouin Traditions, Mansaf is usually offered by Jordanian hosts as a token of appreciation, respect and value. It is an expression of how valued you are to them 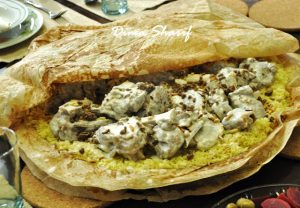 as their guest. The meat used is generally indicative of the guest’s status to them. If it is made with Goat’s Meat that is reflective of the highest grades of respect and value, less is the lamb, and least is the chicken. The original Mansaf will have the cooked head of the goat, placed at its centre. This is usually offered to the most important or valued guest by the host as a symbol of respect and great hospitality.

Traditionally, ready-to-eat Mansaf is placed in a large serving tray (Sider) as it is traditional for all to be served from one dish. Mansaf is traditionally eaten with the fingertips of the right hand, while the left hand is placed behind the back. The host will keep on drenching the rice with cooked Jameed (yogurt sauce) for his guests to enjoy a moistened bite. by doing so, the host is also ensuring best hospitality and celebrating the obviously valued guests.

Those are the traditions, which many still carry out today. But the symbolism of Mansaf still remains that of respect, utmost hospitality and appreciation for guests. It is therefore served when you are being celebrated and welcomed into a Jordanian Home, and always advisable that you express understanding that they have gone above and beyond to make you feel welcomed and appreciated.

Thank you Auntie Nadra for your help with the info about Mansaf’s Origins, Traditions and evolution. I had no idea! 🙂

With that said, please feel free to use cutlery, should you not wish to eat with your hands. I personally use cutlery and there is no shame in that. I do not know how to eat mansaf with my hands and so I spare myself and my hosts the mess! I also do not place a goat’s head in the centre of the dish, we don’t always have access to these ingredients! Moreover, and to make it healthier, I do not use Samen Baladi (Ghee), instead I use olive oil! Yes, I do!!! & everyone loves it! 🙂

It is always good to know the traditions, to love and celebrate them, but in the end we cook, eat and serve food our way. This is exactly why we share recipes, exactly why I love reading and learning about the same foods from different sources. Each has their own touch, so don’t be afraid to have yours in the food you make.

I love Mansaf… find my Mansaf Recipe on this link.

19 responses to “Jordanian Mansaf – More than just Food, It Is A Social Tradition!”