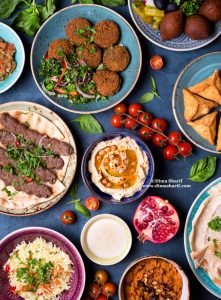 Literal meaning of the Arabic word Mezze/meze/meza: Taste/snack/spread of small plates of food/starters (mezzes is the plural)

Technically, it is an assortment of finger foods that is a staple part of the dining experience in Eastern Mediterranean, Middle Eastern, and Arab countries. This is very similar to the tapas/pintxos of Spanish & Basque cuisines, where a spread of finger foods are presented for guests/diners to eat from over a longer period of dining as they socialise. The ingredients could vary but the concept is the same. In fact, the ingredients and options of Mezze vary within the region itself and from one country to another. At times subtle variances and other times completely different options.

Mezze is usually served with alcohol. While wine could be served and is a popular choice, traditionally mezze is served with anise based liqueurs such as Arak, Ouzo, Raki… very similar to the French Pernod/Ricard. When served with alcohol, mezze can become a main meal, as the objective here is to serve people a spread of food to keep munching on as they drink and socialise, which eventually fills them up. However, traditionally, the mezze is always followed by main course, usually grills, but can be other options, especially at restaurants.

With that said, Mezze does not have to be served with alcohol, a big number of people in the Middle East don’t drink, but they too serve mezze and much on the delicious options as they socialise. As such, mezze is also a big part of Iftar and Suhoor offerings during the month of Ramadan. They are also a regular on BBQ menus, picnic spreads and home entertaining menus with or without alcoholic drinks.

Often, when you are alone and eating by yourself, you are most likely to choose the simplest, fastest and least challenging food option. Rarely would anyone ever go for a six or twelve course menu when eating alone! When cooking only for one, most people would tell you: “I choose simple food. At the end of the day, who am I cooking all this for?” That is very true. Because food is social. We like to share food with others and have company when eating. Even mothers would wait for their children to come back home and have lunch together. When my Dad came back home from work, Mum used to always say: “Come sit with da 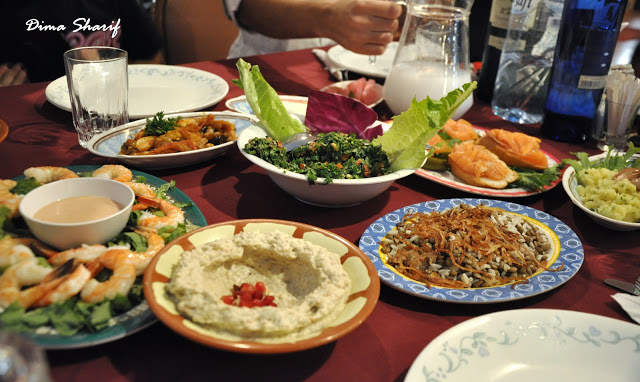 d, so he doesn’t have to eat alone.”  In the same effect, and since the dawn of man, food has brought people together. In the primitive sense, people hunted in groups, and in progression, we chose food to be a medium with which we express our social nature. We celebrate achievements, friendships, family, and well being – any occasion really – by offering food. It is interesting how the best cook in the family always ends up having the busiest home in the family as the house becomes the whole family’s gathering place. Even when it comes to meeting people for the first time, add food to the equation and immediately the atmosphere becomes cosier, warmer and more relaxed. More social. It is fascinating how food brings people closer together!

The Eastern Mediterranean, Middle Eastern cuisine and culture obviously understands and appreciates these facts very, as evidently the area drew upon this in the creation of the Mezze Tradition.

The word Mezze – otherwise known as Muqabilat – is in essence a selection of small dishes served as starters to tickle your taste buds and kick start your appetite. The Mezze culture is that of relaxed food, where people get together and enjoy a variety of dishes (with or without alcohol) in a casual and laid-back atmosphere, all while being social and interacting with friends. The most significant characteristic about Mezze is that it is food to be shared with a group, and not meant to be ordered by plate for each individual. In the Middle East, you would get a variety of dishes that are placed in the middle of the dining table, from which each one takes out into their plates.

Mezze includes hot and cold varieties. It is served as the first course of the meal, usually followed by mixed grills, or other Main course options, then followed by Arabic desserts and fresh fruits. With that said, Mezze can often be a meal on its own! I, for instance, hardly ever want to eat anything else!

Culturally, Mezze is good food, good company and a superb time. It captures the essence of  the social culture and how food is at it’s centre.

Starters are a staple course all cuisines


Every cuisine has a Mezze of sorts: Tapas for Spanish, Antipasti for Italian, Apéritif for French…etc. The ‘Mezze Culture’ though is not just about starting your meal. Mezze is about elongating the time of the meal, creating a social outing – if I may so call it- where food is the centre of this gathering. Where you get to forget about time and just enjoy the company of your friends while delighting in mouth-watering food selections.

Among the most popular Mezze choices in the Middle East are (just a few, the list is too long): 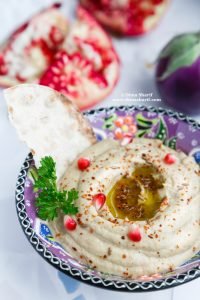 The options are endless and the flavours are Divine. I am getting hungry just thinking about this! Mezze is a manifestation of how food is social. It is a fabulous way to go when entertaining at home. Making the food is not complex, and most of it is ‘make-ahead’ which allows you to actually entertain your guests, rather than be stuck in the kitchen all night. Try out the Mezze recipes on this website, and enjoy 🙂

Keep checking as more Mezze recipes will be added.