“Whither resorting from the vernal heat

Under the branch that leans above the wall

To shed his blossom over head and feet.”

– The Rubaiyat of Omar Al Khayyam

While coffee, especially Turkish and Arabic Coffee are very popular in most Arab countries, tea remains the widest spread drink of choice everywhere in the Middle East. In the Levant for instance, it is customary that people unwind in the afternoon with a cup of tea. They usually sit in the front yard under the shade of a tree where the children play and the grown ups chat. And as they sit, they will greet passers by in the street as usually most people know each other over there. They will even insist they join for a cup of tea.

One beautiful tea tradition, recently revived and brought back to life in many cities after having disappeared for a while, is that of Sabbabeen il Shai  صبابين الشاي  (the traditional tea sellers). Originally, in countries of the Levant and North Africa, it used to be very common to see tea sellers in bazaars, souks and some restaurants. These men characteristically wearing traditional Sherwal  شروال  (wide saddled pants), a red Tarboosh طربوش (a cylindrical-shaped red felt hat with a black tassel draping from one side) and over their shirts wearing a vest of leather straps holding a brass or copper tray containing compartments to hold several cups are known as Sabbabin il Shai (literally meaning the tea pourers) if they sell tea and Qahwaji  قهوجي (literally meaning the Coffee man) if he sells coffee. They will bend to pour you tea or coffee from a larger than life pot that they carry on their backs. Usually ultra sweet tea is served (the preference of most people), which can be flavoured mostly with mint, or sage in some areas. As the tea seller pours the tea, he will lower the cup, to allow the pouring tea to aerate, believed to allow tea to develop a stronger and better flavour. Nowadays, tea sellers are still very popular in some cities, but in most places are either only found in some restaurants as an attraction, or not found at all! During Ramadan however, especially in the recent years, the tea seller tradition is being revived and it is more common to see them in hotels, restaurants, some markets and even malls after Iftar.

In the Middle East, tea is often served before a meal, and always served to end a meal too. Tea is also served for breakfast and dinner. It is even the drink served when getting together with old acquaintances, and an absolute must with desserts. Most people will have several tea cups a day, and at times would sip on tea for hours in the afternoon especially in coffee shops (the term ‘coffee shop’ in this part of the world is used to refer to shops where you can lounge sipping on coffee or tea, which also usually serve shisha).

With that said, the Moroccan tea (recipe on this link) is the one tea tradition that had been most popularized in recent years. While it never used to be so widely accessible, Moroccan tea is now served in almost all coffee shops, Shisha places and restaurants. It is even becoming the tea of choice in most houses, known to be tasty but mostly famous for being stylish to serve; thanks to its dainty (at times colourful) and embellished cups and the good looking, fat-bellied silver tea pot (commonly referred to as the Manchester shape tea pot), all placed over an equally attractive silver tray with embossed embellishments. Moroccan tea is especially popular during Ramadan, where most people would have not just one, but at least three cups of tea after Iftar. The tea is then had throughout the evening, with Arabic sweets and at times with Shisha or during card or backgammon games. Moroccan tea is also flavoured with mint, usually spearmint, while other types of mint can also be used. The Moroccans too, enjoy their tea fairly sweet, however the tea can be had with little sugar or non at all. 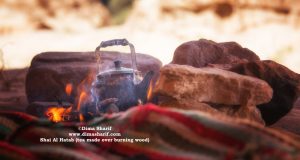 Another very unique tea tradition is Shai Al Hatab (Tea that is made over burning wood). This is always the most preferred way to make tea, believed to produce a better flavoured tea as the tea is made in the pot and left to simmer in that pot over the burning wood. This is then continuously topped up with boiling water and tea leaves – usually two pots are involved: one with the boiling water and another with the tea – this will be topped up many times throughout the day. The resulting tea is usually very deeply red in colour, bitter and very strongly tea flavoured. Some will add mint leaves, some sage and most will have it as is.

This tradition is especially popular in Bedouin communities and also in the villages among the peasants, farmers and field workers. Coming from back in the day when they tended the fields all day long and stopped only for meals and tea breaks all had in the same fields. Also back in the day, when many old cities were gated, the guards who did the night watch will have been making and sipping on this specific tea made over wood all night long, as it helped them stay awake, and did not require them to leave their watch to prepare it.

What’s wrong with just a cup of natural tea!