Yes soups are the base of eating, body nurturing and the food industry as we know it today! If such statements make you curious, then read on and explore how all cooked food started and evolved to all the varieties we know today…

Soup or Shorba is one of the various kinds of soup or stew that are found in all cuisines. The word Shorba / Chorba is derived from the Arabic word شربة shurbah, meaning “soup” and also “medicine”. The word Shurba comes from the Semitic root “Š-R-B”, meaning
“to drink”.

According to the Encyclopedia

Soup / Shorba is defined as a primarily liquid food, generally served warm (but may be cool or cold), that is made by combining ingredients such as meat and vegetables with stock, juice, water, or another liquid. Hot soups are additionally characterized by boiling solid ingredients in liquids in a pot until the flavors are extracted, forming a broth.

The earliest evidence of the existence of soup can be found as far back as about 6,000 BC.

Where exactly did soup originate remains mysterious, however, historians agree that soups probably existed at the beginning of all cooking, as it was discovered that grains became smoother and easier to eat when soaked in water (remember soup is not necessarily hot, it can be cold too).

Back then, animal hides and watertight baskets of bark or reeds were used to contain the soaking liquid and grains. Therefore, boiling was not possible until the invention of waterproof containers that could resist heat, which probably came in the form of clay vessels at first. So to boil water, it had to be placed in one of these vessels and placed over hot rocks, in the same fashion used to cook acorns and other plants at the time.

With the discovery that soaking meats in water made them less dry to eat, it became inevitable to move to combining various ingredients in a large container to create a nutritious, filling, and easily digested meal that is simple to make and serve. It was then that people started having a hearty meal that is filling and better tasting than individual ingredients. This cooked meal had fast become known as replenishing and a good way to restore the body energy.

Herbs had been used, since ancient times, as medicine to cure various ailments. So at first they were added to soups that were intended for the invalids as part of a prescription diet. Soon people took notice that some herbs enhanced the flavour of soups and started using them regularly, also believing that the soups will be healthier eaten that way, curing all diseases. It was then that soups became associated with being a power food that cures all ailments. And that is the root of the thought that food is nurturing, healthy and medicinal. Until today, many people would advise you to have soup when feeling poorly to recover and restore your body’s energy. And this too is the base for choosing to start a meal with soup in order to prepare your body for the meal to follow. Furthermore, this is where the philosophy of breaking a long day’s fast with soup comes from. As it is the easiest, fastest and healthiest way to restore all lost energy and nutrients as a result of fasting. Therefore, during Ramadan all households prepare soup, even if it is not a regular option in their daily meals.

“Soup… This category included liquid foods for invalids, such as beaten egg, barley and emmer gruel…and the water from boiling pulses, vegetables or other foods…soups or purees made from vegetables or fruits…broth made with meal of legumes or cereals with added animal fat…and soup in the usual modern English sense, based on meat and vegetables…Medicinal spices and herbs might be added to these various soups, especially if they were intended for invalids as part of a prescribed diet.”

All these characteristics made soups the perfect choice, throughout history, for both sedentary and travelling cultures, rich and poor, healthy people and those with ailments. Stews, pottages, porridges, gruels… have all evolved from soups and have taken shape and developed according to local ingredients and tastes.

“Cereals, roasted to make them digestible and then ground and moistened or diluted with water to make a paste, either thick or thin, did not become gruel or porridge until people had the idea and means of cooking them. They may initially have been cooked by hot stones in receptacles of natural substances, and then in utensils which could go straight over the fire. Soup, in fact, derives from sop or sup, meaning the slices of bread on which broth was poured. Until bread was invented, the only kind of thick soup was a concoction of grains, or of plants and meat cooked in a pot. Gruel or porridge was thus a basic food, a staple form of nourishment, and long held that place in Western countries, for in practice bread was a luxury eaten only in towns. A thick porridge of some kind is still the staple food of many peoples, and it is not always made of cereals, but may consist of other starch foods: legumes, chestnuts or root vegetables.”

Historically, soup was the main meal. It was not a starter or a part of a meal, but in fact, the meal. According to Escoffier’s ‘The Complete Guide to the Art of Modern Cookery’ (which includes Escoffier’s notes regarding soup classification and serving): “…Soups of the old classical kitchen were in fact complete dishes in themselves and contained, apart from the liquid content and its vegetable garnish, a wide variety of meat, poultry, game and fish…”

But what does soup have to do with the origin of Restaurants?

Since ancient times, people shared food with passers by and travelers. Back then it was a necessity to the very existence of those on the move. Because travel would take days and at times months to reach a destination, no amount of food was ever enough to carry on. Therefore, people fed those travelling from their own meals. Since most meals consisted of ‘soups’, these were the meals served to passers by. Many areas would then have a specific place that prepares and offers food to general public. These were the earliest forms of today’s street vendors selling food. Besides travelers, not all residence areas in the past included kitchens, in fact back in ancient Greece, most areas would have one thermopolium which cooked meals for the whole neighbourhood.

Thermopoliums consisted of L-shaped counters, into which large storage vessels were sunk, which would contain either hot or cold food, and mostly hot soups as travelers need to have their energies restored and their body’s recovering from exhaustion. These Thermopoliums are usually seen as the origin of a public dining facility (restaurant). 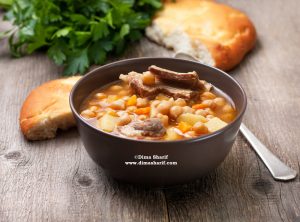 The Encyclopedia defined the term restaurant as“a medical term; it is a remedy whose purpose is to give strength and vigor.” As the word ‘restaurant’ literally means something restorative, and soups were originally referred to as Restoratifs. With the passage of time, vendors and public dining facilities became more common to find, and still targeting travelers and those on the move, such as inns and street stalls (vendors). Back then, soup was the only meal on offer. In fact the vendors would come up with creative soup concepts and were called Restoratifs, meaning that which will restore your strength. The famous vendors then opened a facility including a kitchen and a dining hall in order to cater for more people and called these ‘restaurants’ as they originally served soups, breads and drinks. From there the restaurant concept evolved into what we know today, which is a long story better kept for another occasion.

So you see, soup has since the dawn of cookery been such an interesting meal. It is at the heart of all flavour, health and eating. Looking deeply into soups allows us to explore the history of food, the evolution of life and the creation of gastronomy. Soups are delicious and really good, so maybe you would want to consider serving them even when Ramadan is over.

Check out the many recipes in the soups section for soups to make at home. 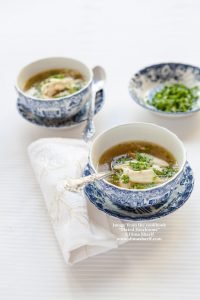 Hope you have enjoyed getting to know soups a little closer, and that you are enjoying exploring a little bit of food history. You see I find food to be a tell all and if you want to learn more about people examine their food and eating traditions. I think this is the true meaning of Brillat-Savaran’s famous quote: “Tell me what you eat, and I will tell you who you are.” I look forward to reading your comments, so do leave one before you go, and tell me what you think. and before you go, please do share with me, if you have any more info on soups and their evolution through history, I am always eager to learn more 🙂

Food For Thought – Relax, and Listen to your Own Thoughts as often as you can.

The world is beautiful, all its people are beautiful, all cultures equally important, and all the same in the end – all out there for us to explore…
Ramadan Kareem