Zaatar seems to be a bit of a confusion as I had recently found out. Most are unable to determine what it is. “Is it an herb?”, “a spice mix?”, “a concoction?”, “a dried collection of herbs?”…etc. are all questions am hearing all the time.

So I thought – and while I do have it all explained in my book, Plated Heirlooms –  to clear this out for you here too. 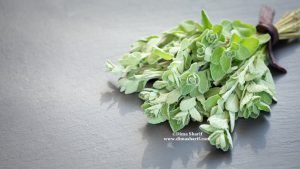 Perhaps the confusion is a matter of language barrier, because in Arabic the word “zaatar” refers to the plant (the herb), and the dried mix (with varied recipes and flavours depending the country, cuisine and at times even individual tastes) as well as the dried zaatar herb (similar to dried oregano). Whatever reasons behind this, here are the facts…

is the Arabic word for an herbaceous plant that belongs to the greater family of herbs known as Genera Origanum (which includes herbs such as oregano, thyme, and marjoram as well as zaatar). All the herbs that belong to this family have very similar properties and fall within the same aroma one way or the other. Some happen to be more pungent, while others are milder, however, more or less very similar.

With that said, Zaatar is most popularly the Arabic term that applies specifically to the herb that is Origanum Syriacum. In the many Arabic-speaking areas there are different varieties of zaatar, all of which are referred to as zaatar in Arabic language, however, only the variety indigenous to the Levant (which is the ones I am using to make my Dried Zaatar Mix) that is actually origanum Syriacum. The rest are other herb varieties within the Genera Origanum family. It is worth mentioning here that as the different regions produce different plants the flavour is also varied yet within the same bounds of the family of Origanum.

I use to make DS Organic Zaatar Mix is the variety indigenous to the Levant (Origanum Syriacum). As over there, a very pungent variety of zaatar grows that has a short round leaf and known to be the most pungent zaatar in the origanum family..

Zaatar In Arabic Cuisine is widely used and has many applications. There is the fresh zaatar, which is a popular herb to serve next to food, or mixed into the food. There is even a dedicated zaatar salad, which is a salad of fresh zaatar leaves and sliced onions, some even add green or black olives to this salad and even white cheese. The salad is usually dressed with a lemon and olive oil dressing and is seasoned with salt, black pepper, and sumac. An amazing salad that I can have any time!

The fresh leaves are also used in the making of bread, where the picked, washed and squeezed leaves are added to bread dough and baked. The most popular of which is the Palestinian Fteer Zaatar (recipe in my book, Plated Heirlooms).

Then there is the dried mix, which comes in a variety of styles. The variety of the mix ranges from Zaatar to Dukka. Zaatar being the greener variety that uses no to minimal other flavorings (the more flavourings used the more towards Dukka zaatar becomes). In Dukka, zaatar is another one of the components of the mix, and by no means the main component. It is zaatar mixed with sumac and/or other spices, and has a more reddish colour to it than green. The less reddish the colour, the more za’atar is used, the more reddish the colour, the less zaatar is used. This is the most popular type of zaatar around the Middle East. The use/addition of spices to the dried zaatar mix varies from maker to another. There is the traditional Palestinian Zaatar mix, which is pure Zaatar and sesame, no added ingredients (spices or any other flavorings).

This is the method I use in making my zaatar: Pure and uninterrupted zaatar experience, following my family’s ancient recipe. Then the well-known Jordanian Zaatar Mix which mixes in Sumac with the Zaatar, however keeping the zaatar as the main ingredient. The Lebanese and Syrian Zaatar also mix in Sumac and some even add Lemon Salt to it. There are makers who add oregano to the mix, cumin and some even add a variety of other spices including dried coriander to hibiscus… However the latter additions are not original to the dried za’atar mix, they are more individual takes on this classic component of Arabic cuisine.

How this dried Zaatar mix is used

The Dried Zaatar mix is popularly eaten for breakfast, as bread will be dipped in oil, then dipped in this zaatar. It is usually served alongside sliced tomatoes and cucumbers. It makes many children’s school sandwiches in the Middle East and is also used in the making of Zaatar Mana’ish (see the picture opening this post from my cookbook, Plated Heirlooms). 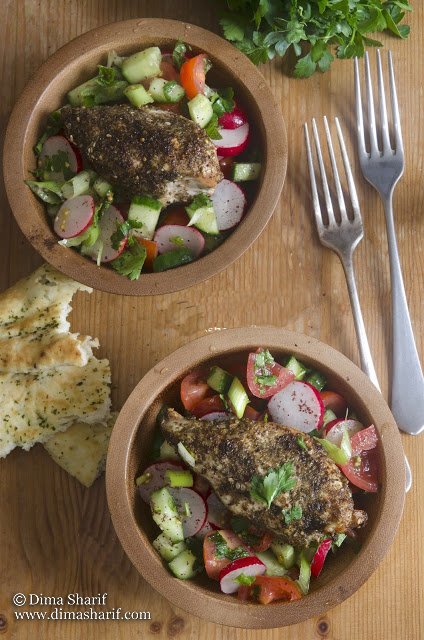 The dried mix is also used in the baking of bread, and other pastries in Arabic cuisine. It is also used as a seasoning to Salads; this is especially popular in Palestinian cuisine, and the Palestinian cuisine is also known for using this mix in the seasoning of concoctions and marinating chicken, take the the cuisine’s traditional concoction ‘Zaatar Chicken’ for example. This is especially true in the smaller cuisines of Bethlehem and Jerusalem (detailed in my cookbook).

Because it takes a whole lot of fresh zaatar to dry and make the zaatar mix (which becomes more expensive to produce) a lot of makers will add too much of other flavourings to increase the yield. Some take it as far as cheating the quantity by adding ground grains to the mix. This of course affects the flavour of zaatar and its final quality. Look out for good quality zaatar that does not have any of these additions, a zaatar mix should be made out of zaatar, not mixed with ground wheat or ground chickpeas! Good zaatar is really worth the extra buck, because it is the real zaatar and its flavour is unmatched!

I hope that this clears out some of the confusion as to what Zaatar is. I do believe that I make the world’s best Dried Zaatar Mix, but of course I am biased! Therefore, don’t just take my word for it, but ask everyone who has tried it. And better still, drop by at The Farmers’ Market On The Terrace every Friday during season and try my zaatar out yourself. I always let you taste before you buy. You will then know the difference! I am there every Friday selling it along with many other varieties of my fantastic Organic Mooneh Essentials 😉

The Farmers’ Market On The Terrace : #TFMOTT is a real farmers’ Market where you get to buy produce straight from the farmers, with no middleman involved. I source all my ingredients for home-cooking as well as for producing my organic Mooneh from there, and from the local farmers themselves, and I also sell my mooneh products there. This market takes place every Friday from 8 am – 12 30 pm at Bay Avenue (behind the Executive Towers).