My Friend had asked me to post my Mloukieh recipe a while back, I just got a chance to do this and so here we are.

This is one of my favourite Palestinian Cuisine concoctions. It also happens to be everybody’s favourite and is especially famous with kids! For the longest while, every time I asked my children what they wanted for lunch, they would always say “Mloukieh”!! If it was up to them, they will have it everyday of the week!

I even did a little experiment once with one of my son’s friends, who came over for a play date. I had cooked this amazing dish for them. Being English, and Mloukhieh not part of that cuisine’s offerings, he had no idea what this food was, but I asked him to just try and if he didn’t like it I would give him something else to have. He tried it, and loved it that every time he comes over he says: “I hope you cooked that seaweed soup, coz I love it!!” lol. He really thought it was seaweed soup! He even told his mum that I make the best seaweed soup in the world! She once called me asking for my seaweed recipe, because her son keeps asking her to make it! I had no idea what she was talking about! It was not until he came over after that, and explained to me what he meant by seaweed, that I made the connection heheheh 🙂

I totally recommend you give this a go if you have never tried it before, because it is truly good 🙂

Of course Mloukieh is not seaweed soup, it actually grows on land! It is the leaves of Jute (similar to spinach, yet more bitter in flavour). These fresh green leaves are treated as vegetables in Middle Eastern cuisine. They are also known to North African, East African and South Asian cuisines. It is eaten cooked, not raw, and in Arabic cuisine it is usually cooked in chicken broth (most famous) or meat broth – and in some cases cooked including both meat and chicken together.

This stew is said to have originated in Egypt, however, as common with Middle Eastern cooking, it is not very well known how the region got to eat Jute leaves, and where it started exactly. One plausible story though, is that Jute leaves were consumed by the Pharos, and were brought west of Egypt and into Palestine by the migrating Jews. Of course the story is longer than just that line, but for this recipe post, I will leave it at that.

Mloukieh is usually served with a rice pilaf, alongside roasted and browned chicken. Custom has it that when hostesses are cooking a special lunch for guests, they would serve the Mloukieh along side Djaj Mahshi (Stuffed whole chicken – stuffing is a mix of precooked rice and minced meat. The succulent and elaborate Stuffed Chicken recipe is in my book Plated Heirlooms). Usually each of the three items are plated separately and the hostess will plate rice topped with Mloukieh alongside a piece of chicken and a lemon wedge. Mloukieh needs a squeeze of lemon to perfect the flavour, or you can prepare a special vinaigrette with onions and chilli (recipe below), which fabulously compliments the flavours of this dish. I would normally have both ready, lemon wedges and the vinaigrette, and keep it up to each one to decide which to go for.

Some preparations of Mloukieh include coriander and some don’t.

When the recipe includes coriander, some will cook the coriander with the stew, and others would lightly fry coriander and thinly sliced or crushed garlic in a little olive oil, then add it to the top of the finished dish. Whichever way you decide to go, the outcome is the same as the flavours eventually intermingle creating the whole either way. However if you are not into the whole coriander business (although highly recommended) you can skip this step and cook it without coriander.

If you have access to fresh Mloukieh Leaves (It is sold at the Farmers’ market here in Dubai from Feb through to April. It can also be found at the Co-op during this time), then you need to cut the leaves off the stalks. Discard the stalks, then wash the leaves and dry them. Usually the leaves are placed on a large tray to air dry for a couple of days, tossing them occasionally to ensure equal dryness. They are then  lightly stir fried and frozen till ready to use. My mother in law told me that she freezes them without stir frying, which I have tried and found to work very well too (one less step). Then the leaves are used in the same manner as the finely chopped method below.

After many explorations and experimentation and all, the below is how I cook Mloukieh at home. How I love it best and how my family likes it too.

Clean and roast your chickens as instructed in the link above. While the chickens are roasting start making the stew.

In a large pot, place the olive oil, the thinly sliced garlic and stir fry until the garlic is translucent but not browned (browning the garlic will lend a bitter flavour which is not favourable here). Once the garlic is translucent add the finely chopped coriander, and stir fry for 3 minutes. Add the thawed Mloukieh (whole leaves or finely chopped) and stir fry to incorporate. Continue to cook while stirring for about 2-3 minutes. Add the chicken broth, and stir to combine all. Check seasoning and adjust as necessary. Bring the whole to a boil, then let boil for 2-3 minutes, then reduce the heat and simmer for 20 minutes or until the leaves are cooked through and the flavours have meshed together.

Place all vinaigrette ingredients in a jar and shake until all are incorporated. Please note that because there is no emulsifying agent in this vinaigrette the mixture will separate, therefore before serving shake again and stir before pouring.

place rice on the dinner plate, top with a ladle of stew alongside a piece of chicken or shred some chicken pieces instead. Then pour a little vinaigrette on top or a squeeze of lemon juice. Mloukieh is always served with brined green olives, spring onions and assorted pickles on the side.

And there you have it, Mloukieh the old fashioned way, the always good and comforting way 🙂 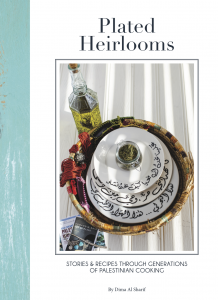 This recipe is from the repertoire of over 280 recipes in my book Plated Heirlooms. The book contains recipes from all sections of the Palestinian cuisine, starting with Mooneh (pantry recipes) to dessert and everything in between. Plated Heirlooms is a documentation of recipes and cuisine rationale as well as the compiled story of the cuisine.

All Plated Heirlooms recipes come with background information and thorough descriptions that in the end tie up with the rest of the book’s narrative to explain to you the formation and makings of Palestinian cuisine.

You can order “Plated Heirlooms” here and we will ship it to you anywhere in the world.