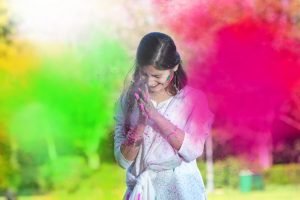 This post & recipe are by @dimasharifonline longtime online friend Navita (instagram handle @snoritaz). She shared this there and I asked her to reshare it here, because who does not love the flying colours of Holi festival!! Also because when the weather changes and heat starts kicking in, refreshing cold drinks are much appreciated! We all know its getting warm in the UAE, so here is a drink to cool you down! I have also included for you a video for Lassi, which like Thandi, just made with yogurt instead of milk and is more like a smoothie. These are India’s go to cool down drinks, so in prep for summer, here they are for you to try them.

But first see what Navida said about her recipe:

Thandi Thandi #Thandai
.
.
Indian culture is full of festivals…but after Diwali my next personal favourite has always been Holi…less for the colour drenching and balloons splashing but more for the delicacies made during this time of the year.
It marks the change in seasons..the short lived spring is savoured to the maximum…even in the foods that are offered and consumed now.
.
I am a dry fruits merchant’s daughter so it’s but obvious that I love my dried fruits and nuts way too much. As a child my go-to snack was kaju-kishmish (cashew-raisins) 🥰
.
This is the time when #gujiya and #malpua is cooked at my house. Maa and nani-maa both kept the tradition alive and now the baton has been passed down to me….so this year there will be malpuas and gujiyas to be washed down by the mandatory Holi drink…thandai!
.
Thandai has many health benefits apart from it being magical on the tastebuds.
It has black pepper, fennel, poppy seeds, gulkand (rose jam) among other spices and nuts, that act as a coolant for the body.
I have substituted poppy with melon seeds as poppy is banned in the region I live. It’s a simple recipe and I am surprised why did I not make it before. Definitely better than any store bought mix. Not even @gurujis comes close…and that’s the best in the market.

Grind all the items and strain to get rid of big lumps.
At this point it can be stored in an air tight container, ready to use when ready to serve or mixed with the milk immediately.

When ready to serve,
Mix with 1.5 ltr of chilled whole milk and serve cold.

“Remember to add #sabja seeds (the chia like seeds but not chia) to make it extra fun and cooling for the summer.”