So what is Filo dough?

* All spellings are correct and commonly used to refer to the same term.

**Unleavened meaning: without the use of a leavening/rising agent such as yeast or baking powder…etc.

Sheet pastry doughs are classically prepared one layer at a time, and can be assembled into pastries that use a dozen layers before cooking such as in Baklava or Börek for instance. These super thin sheets of dough are not to be confused with puff-pastry, the preparation of which is very different from the making of filo. Unlike filo, in puff pastry, the layers are created in the actual process of making the dough – by wrapping in the butter rolling and folding as you go. With layered filo preparations, the layers are created before cooking and way after the sheets have been created.

Filo dough is created by making stiff flour and water dough. Some recipes use acid like vinegar for tenderising the dough, others use oil. The result is the same, which is a paper-thin (1 mm) translucent dough that can quickly dry and become brittle. It is therefore brushed with oil or butter until it’s cut to prevent it from stiffening and drying out.

Another variant to filo dough is the strudel, which is very similar to filo except it will include little fat and usually a whole egg in its ingredients. The making of either one usually involves the same techniques. 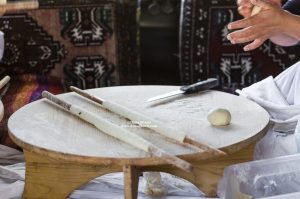 It is widely believed that phyllo, which is Greek for Leaf, was invented in Istanbul at the times of the early Ottoman Empire. But some historians believe that a more primitive version of it, was evident in the drawing of the early Egyptians. However, the closer version to what is now known as filo comes from the Turkish cuisine. When the Ottoman Empire ruled parts of Eastern Europe, the phyllo dough was adopted in Hungary as Retes and in Austria as Strudel. Phyllo is also the ancestor of the French Feuille.

Filo can be used in a variety of ways, rolled, turnovers, folded, layered… and can have a variety of fillings from vegetables, to green leaves, nuts and chocolates and anything you can think of. It is commonly used in making Samboosik, or Samosas.

To make Filo pastry at home, you will need a specialised rolling pin, that is about 1.5-2 meters long, which is thicker in the middle and moves on to thinner edges. This rolling pin is used for rolling out the dough which will keep on stretching as it rolls, the only substitution to this rolling pin is a dough sheeter, which is not readily available in most homes. You can custom design a pin at any carpenter’s if they are not available in your local market. You will also need a 2.5m square 100% cotton sheet (you can buy a bed spread and use it for this, however make sure it is 100% cotton, as the cotton absorbs the excess moisture making it possible for the dough to stretch). Finally you will need a large table or surface to roll the dough and stretch it, as it will stretch to 2 m square. If your table’s surface is rough or with strong texture, use a thick table cover to cover it under the cotton sheet in order for the dough not to tear.

The video below includes a different filo dough recipe than the one I learnt to make (more of a strudel type), yet it is much easier to make than the original pulled sheet pastry. I think you will find it very doable. I also love that it includes the method for the Palestinian dessert Warbat, which I absolutely adore, and know you will love too. Take a look and see how easy this is.