I had first visited Mauritius 10 years ago. One thing that stuck in my mind was that Mauritius is stunningly beautiful. But the most outstanding characteristic I took home 10 years ago was that Mauritius has such deep relationship with produce. In fact, its whole history and culture was defined by produce (sugar cane at most, tea, rum and others to follow). I had to go back! This time around with an objective to be less enchanted with its beauty and more focused on its culinary heritage and culture. I had managed to cover its full and most culinary aspect, despite the irresistible distractions of its gorgeousness, which I also got to indulge in.

Thinking of Exploring Mauritius as a Culinary Destination? This here is the introduction….

A glimpse of the scenery

Situated in the Mascareignes region 2000 Km off the east coast of Africa, Mauritius is a beautiful exotic island with stretches of white sand beaches, by a perfect sea of all shades of blue. Framed with the greened dormant volcanic mountains overlooking the earth covered with sugarcane fields and lush vegetation, which are fed by the occasional waterfall, sweet water ponds and meandering streams.

Traveling through Mauritius you meet plants that you could not have possibly seen before. Trees that look like strange hand carved tubes, hollowed bamboo cups with the most bizarre roots, to all types of palms… Then you are greeted with such beautiful botanical gardens that only the earth of Africa is capable of producing. The orchids, the flowers, the strangest pods of fruit and psychedelic vegetables are all harmoniously coexisting at every turn on that island. Birds, snails, crawlers, monkeys and many other types of life have found such comfort in their natural homes and are not by anyway deterred by your presence.

Just on the beach a few steps into the water, sea cucumbers, flying fish, crabs of all sizes and colours, sea snails, sea urchins – and that is just to name a few – are everywhere. So much so, that the sight of people with very simple fishing rods, fishing by the beach (literally at every corner of the island) is very common. In fact, many of the locals would carry a white bucket, a metal wire with bait, a snorkelling kit and head to the nearest beach (which is everywhere). They would secure the bucket with sand away from the water, put on their snorkelling gear and go for a swim. The next thing you know, a large octopus, a few sea snails and a dozen sea urchins are placed in that bucket and taken home for that day’s lunch! All that happens as you lay on this soft sand, soaking the sun, then cooled by the caress of the wave just hitting the shore! The beautiful and differently unique beaches on all coasts of Mauritius have been for centuries luring visitors from all over the world. 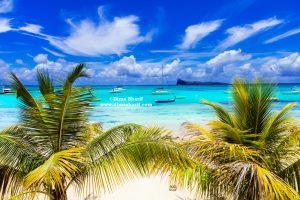 The rural areas of Mauritius are stretches of green upon green occasionally studded with old and withering trucks. Seldom you will find huge sprinklers pumping water over the fields, which against the higher light of the sun, produce rainbows just in case the frame lacked colour! Lining the fields are the antique homes of the farmers, villagers and fishermen. A small garage-store offering all that the villagers may need is next to a small liquor store which is a few steps away from a wooden table mounted on 4 large bicycle wheels, topped with all types of fruits and vegetables, that are just cut and loaded to sell to today’s cooks. Then a slightly more refurbished looking souvenir shop is there to remind you of your tourist status quo.

Then come the cities, in which more sustained buildings start to rise leading up to modern architectures and reserved historical monuments. Kissed by the bays on which marinas stand showing off their yachts, catamarans and sail boats. All of which you watch from a waterfront strip of restaurants, pubs and benches. Then having to drag your feet off each picturesque spot, you will find city markets, souvenir shops, casinos, modern malls and street vendors.

Whether you go to the best loved tourist spots, or you park your car by a cliff; be it a field, a beach a mountain top, or even a water damp… it is all breathtakingly beautiful and soul soothing.

You see, I told you that you try hard to focus on your subject matter, but you can’t help except be distracted by the island’s beauty!

The Beautiful People of Mauritius & Their Cuisine

Mauritius was first landed on by the Dutch, who eventually left it to become colonised by the French, who set root for the sugarcane production. The British followed to rule Mauritius and transformed it into a sugarcane production colony. This lead to the many immigrantions that took place in Mauritius. Migrants from France and England came to Mauritius as governors and their crew. The Africans were brought in as slaves at first, then as slavery started diminishing, the Indian immigration started as labour power, and is still ongoing today. Then there are the Chinese traders, who settled in Mauritius and have become local inhabitants. All of these people have settled on the island centuries ago, and make up the local citizens of Mauritius.

Therefore, Mauritius has a very diversified culture, each of which bringing their own lifestyles, beliefs and even cuisine. The end result is a very interesting blend of people and belief systems that harmoniously coexist, offering its tourists a bit and a piece of everything. Whatever it is you are looking for, especially spiritually, you are most likely to find over there. From Ashrams, to very old churches, to mosques and temples, all are there for you to explore.

This diversity has reflected itself hugely on the Mauritian cuisine. The cuisine is generally Creole, like that of the Seychelles. However, it is evid 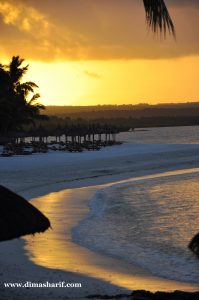 ently more pungent in flavour. The choice of sharp flavours such as mustard, gingers, fish sauces, chillies is very characteristic of Mauritian Cuisine. Unlike its milder flavoured neighbour Seychelles, here the Indian influence is strongly evident. Typical of Creole cuisine, curries make up a huge part of their cookery, mostly seafood and everything else follows. Their curries are either plainly dependent on spices (called yellow curries), mixed with mustards (called Vindaye), or with coconut milk (referred to as Vindaloos). All of which, completely delicious, and Must Try’s when there. More Mauritian than Creole are the many versions of Biryani, which are very Indian in application and flavour. Then there are the fritters, Beignets, gratins, roasts and stews which are more French and British in origin, but cooked with the Mauritian flavours and aromatics. Fish cakes, crab cakes, dumplings, noodles… done the Asian, mainly Chinese way, with a Mauritian twist are all part of the cuisine too! Finally and most importantly there is the African touch of exotic fruits added to the mix, just in case the flavour was missing anything! It is therefore, completely common to serve a menu of Samosas with Sweet Chilli Sauce, Bok Choy Dumplings, Pineapple Mustard Salad, Gingered Roasted Snapper alongside a Breadfruit Gratin followed by Flambeed Bananas! Sounds very chaotic, but somehow works amazingly! A colourful feast in true African fashion!

The above alone is enough reason to call a Culinary Trip! Just to see how all these elements mix together. To know how such an abundant menu of flavour profiles is received by your palate. To learn how to achieve balance when so much is in one plate! A country defined by the sugar industry and trade. One whose culture springs from the fields. An island of diversified and varied produce. Exotic, beautiful and very unique… I would say definitely makes Mauritius a Must Culinary Destination.

This is just the tip of the iceberg! Come back soon to read about The Sugar Adventure, The Rum Distilleries  The Vanilla Plantations, The Tea Plantations, The Produce Markets, As well as the tried and tested Restaurants of Mauritius, the Must Eat Foods while in Mauritius and more…! Yes, Mauritius is a foodie heaven.

Here are some relative Mauritius Links

I go on my Culinary Trips on my own behalf, self-funded and do not earn any income for recommending any accommodation, restaurant, service, activity…etc. I share my experience with you to hopefully inspire you to try the locations, services and activities which I have personally found outstanding. The views expressed on my website are my own.