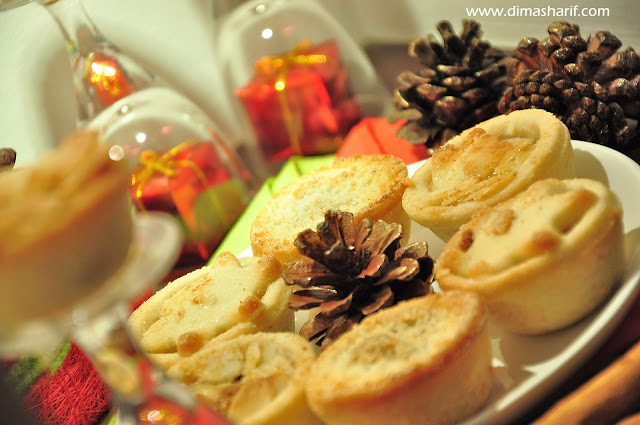 The first time I had mincemeat, I thought: “This must be a joke!” It was Christmas, and definitely not Halloween’s, but it sure felt like a trick and no way near a treat!!

It was a school Christmas celebration and there was a lot of food on the table! A friend of mine had brought these cute little pies that looked gorgeous, with little stars on top, sprinkled with a light dusting of snow (icing sugar). I always smell my food before I eat, and this smelled like spices. Cinnamon and hints of cloves, barely escaping the butter from the pie shell. It smelt sweet and like something I want to eat! I closed my eyes, the smell getting stronger as the little shortbread case came closer to my mouth, thinking of the crunch of the shell, and the smooth filling oozing into my mouth filling it with a burst of spice flavours….. and… BREAKS!! Literally!! It was like, “what is this?” This is not good! It totally killed my dream of an apple pie simulation with Christmas spices!! Ever since then, I never tried mincemeat pies again! I always thought it was nasty food!

A few years ago, I was invited to a Christmas Dinner and the host insisted I try her mincemeat pie. I don’t like to disappoint hosts who have spent all day in the kitchen cooking and preparing food so I had to try. I was dreading it, I am no friend to mincemeat. I was scared! Very reluctantly took a bite and to my surprise it was actually good. It did taste like Mincemeat, but it did not have any of those nasty flavours from my earlier mincemeat encounter!! She asked me what I thought and I told her my story with mincemeat and how I was very reluctant to try, but that it was actually good!! She explained to me that, the goodness of this pie filling depends hugely on the use of fresh good quality products and a darn good recipe. Amen to that! Because if you have bad quality mincemeat it definitely puts you off the whole thing! It did me for years! 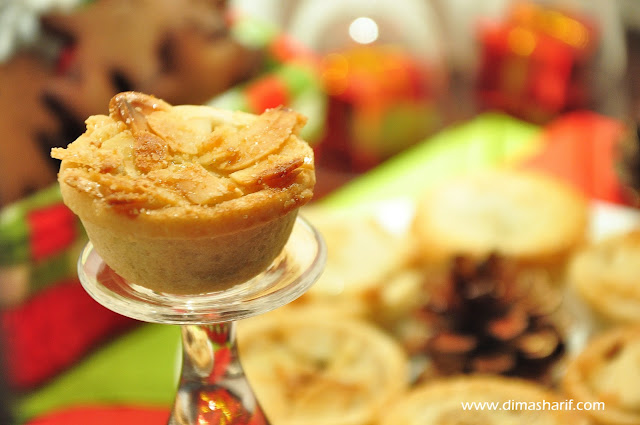 The other day, at my ‘Ultimate Christmas Dinner’ Demonstration, I was requested to post mincemeat recipe for the festive season. To be very frank, I do not have a recipe for mincemeat, for after the Mincemeat Trauma I had, I was never interested in making them. I kind of pushed that food concept out of my brain cells and always pretended it never existed!! I had promised the lady to post a mincemeat pie recipe here, and that I shall do.

This Mincemeat Recipe is an adaptation from that of Delia Smith… I have changed around a bit and added my Christmas flavours to it. I have also included for you my favourite pie crust recipe, and the way I dress mincemeat pie. When I finally baked the pies I have to say they tasted good, and those who like mincemeat pie thought ‘they were the best they ever had’. I have to admit though, it is still not my favourite pie in the world!! Perhaps the association I have. But I can’t say I will faint at the mention of it, which was how I felt earlier!

Traditionally, Mincemeat is made with shredded Animal Suet, which is raw hard fat found around the loins or kidneys of beef or mutton. The idea did not sit well with me. Even if it were to be cooked and somewhat melted, it did not feel right to go for pure animal fat like that. So I have substituted with shreds of plant suet instead (making this recipe suitable for vegetarians). Plant or vegetable Suet is made from Palm oil mixed with rice flour and sold as white shreds in a plastic packet. I had bought the plant suet from Waitrose (Marina Mall) a while back, and most probably you can still find it there. The use of suet helps preserve the mincemeat as when the apples are cooked and jarred their juices are released and can cause fermentation which ruins the mincemeat. The suet coats the apples keeping their juices in there and coats all the rest of the ingredients, making it easy to preserve mincemeat (if placed in a properly sterilised jar).

Here is how its made… 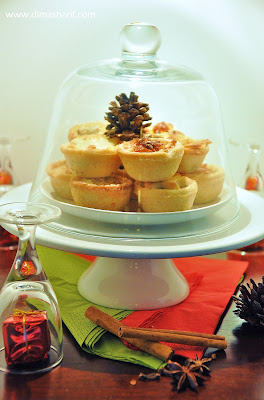 Juice and zest of 1 lime

Place all ingredients, except brandy if using, in a large heatproof bowl. Mix well to combine all. Cover loosely and store in a cool place overnight, stirring occasionally.

The next day, preheat oven to 225F and place the bowl, covered with foil, inside the preheated oven and leave there for 3 hours.

After 3 hours of cooking on low heat, the fat will have melted and the mincemeat will appear like swimming in the fat. That is how it should be, so don’t be alarmed. Stir to coat all ingredients with the fat and leave to cool loosely covered until the mincemeat is cold. Stir the mincemeat often during the cooling process.

Once the mincemeat is cold, stir in the brandy if using, and vigorously stir the mix to combine all. It is now ready to be canned in sterilised jars. Remember that you can gift your friends some mincemeat jars for Christmas, if they are into mincemeat, they will really appreciate it 🙂

Mincemeat is now ready to use for making the pie. 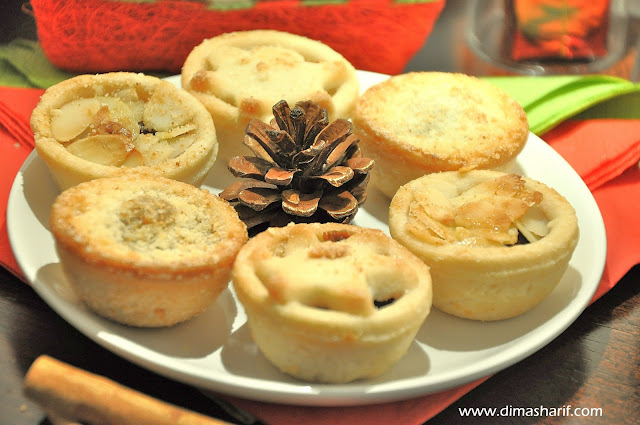 For the Pie Crust

When ready to use, roll out the dough, slightly larger than the pie plate you are baking it in. transfer the rolled pastry onto the pie plate and gently press along the bottom and sides to cover all with the dough. Remove excess filling 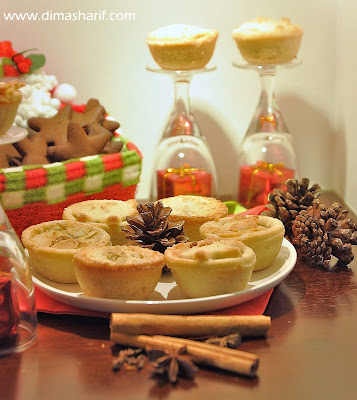 Place the mincemeat filling on top of the pastry and evenly spread.

Roll out the remaining pastry, and cut stars or festive leaves, dip them in caster sugar mixed with ground cinnamon, and place on top of the mincemeat, try to enclose the filling but keeping some openings for steam to escape.

Another way to dress the pie is to spread the top of the mincemeat with a layer of sliced almonds and sprinkle caster sugar mixed with cinnamon along the top. Whichever way you decide to go, both will taste very good especially as they brown and the sugar melts and caramelises slightly.

Bake in 375F oven for 25-30 minutes or until the pastry is golden and crunchy.

You can go for mini mincemeat pies instead of a large pie. Follow the same instructions but fill the holes of a cupcake tray instead a large pie plate! Carry out as you would in a large pie plate. Thank you for reading this post, I hope you liked it!