I love artichokes whichever way they are prepared. But they have to be fresh artichokes, because they are no way near the watered down, brined, canned ones. It is unfortunate that we don’t always get fresh artichokes here, because I love this vegetable, love preparing it and then really enjoy eating it too. Well if you do get your hands on fresh artichokes, don’t be intimidated by the look of it, it is not hard to prepare at all. However, using fresh ones will make all the difference to the flavour and texture of your food.

Watch Michelin Chef Oliver Glowig, prepare his artichokes creating little cups for stuffing. These prepared artichokes can then be filled with any of your desired fillings and served as an appetiser, or as part of a salad. Bigger ones can be prepared the same way, and they can be filled and cooked, served as a side dish or the main meal. There is really no limit to what you can do with artichokes and no limit to how much everyone will love them, once made using fresh ones.

You can fill artichokes with almost anything.

My absolute favourite way to savour artichokes is when they are steamed and served whole to dip in butter lemon. The original french way! It really is perfect food with nothing else needed at all. An absolute sundowner snack like no other.

However, if you are looking for variations check these options:

You can also follow Chef Oliver’s recipe on this link for stuffing the artichokes: Lobster Carpaccio Over Stuffed Artichokes 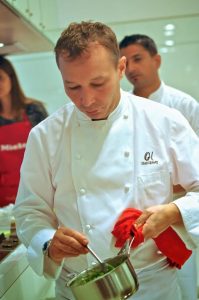 Chef Oliver is a 2 star Michelin Chef, who started his journey alongside his father in Germany. Those early days were marked by his food curiosity and took on an adventurous style. This journey soon took on a passion for artistic experimentation.

The art of Chef Oliver is embodied in a journey of flavors and emotions that guide his path. He left Germany in 2001, a year after he earned his first Michelin star restaurant “Watercolor” in Monaco of Bavaria. Headed to the Amalfi Coast, in Italy, where he is the Executive Chef of the restaurant “L’Olivo”. In 2004, he confirmed the star he’d earned in Germany, and in 2006, he was recognised with a second Michelin star and 17/20 L’Espresso.

“With two Michelin stars, preceded by a score of 17/20 on the Guide de L’Espresso, the restaurant of Oliver Glowing ranks among the top Italian restaurants.”

Appreciate, love & give back a little this Ramadan 🙂