“Ramadan in my country means Home and Family. We like to eat at home during the Holy month, or at a close relative’s home. We enjoy family gatherings, and raise our kids to appreciate them too, as we believe these family ties have a huge positive effect on our kids. Teaching children to be close to and appreciate family enhances virtues of kinship and love in their minds.”

Characterised by a generously varied geography, Jordan houses the desert to the south and East, a variety of agricultural plains, mountains and terraces in the mainland, the subtropical areas of the Jordan valley of the country’s west side, which also houses earth’s lowest below-sea-level spot (the Dead Sea), as well as pinning many high mountains housing lush green and vegetation in the North. These geographical variations are very well reflected onto the country’s cuisine, as the Jordanian cuisine differs from an area to another, both in ingredients and method of cooking.  The Jordanian cuisine is unique as it is the outcome of a marriage between Bedouin food and the agricultural community’s food. I say unique, because in most cases the food is either evidently Bedouin or characteristically agricultural, however, in Jordan it is very common to see both features in the same dish and on the same table.

Like every other country I have explored, Jordan has a unique Ramadan Spirit, consisting of mainly spiritual traditions such as the performance of Taraweeh prayers in mosques by most, practicing Silat Al Arham صلة الأرحام by hosting large Iftars for family members and visiting extended family throughout the month , as well as practicing Sadaqat صدقات (donating money to those in need, also including distribution of Ramadan Mooneh مونة رمضان to the needy, to include meats, rice, flour, eggs, pulses…) among others. Ramadan in Jordan is a month where most people turn their attention to helping the community, especially those who are in need.

With that said, Ramadan in Jordan has many cultural traditions too. From decorating homes with Ramadan themed knick knacks, lanterns and the hanging of lights on the balconies in the shape of the Ramadan crescent and star… to the restaurants and cafes all offering Ramadan Special menus and entertainment, including special menu items such as Atayef, Um ali, Osmalieh and other Arabic desserts as well as Turkish coffee, green tea and lately even Moroccan tea. Throughout the month, Shisha is almost offered everywhere, and some cafes will even go the length of offering Henna Tattoos, coffee cup fortune telling and palm reading as part of their entertainment. During the Holy month the days are quieter than usual, while the nights in Ramadan are buzzing and most people would be out in cafes and restaurants after Iftar, and these Saharat Ramadanieh سهرات رمضانية (Ramadan evening hangouts) would last till very late at night.

The Jordanian kitchen Preparations for the Holy month

I had spoken to the Jordanian food blogger Rawan Otoom about the Jordanian Ramadan traditions. And as we talked about the kitchen preparations for the Holy month she said: “We start preparing for the holy month weeks ahead. This also includes displaying Ramadan decorations (lights, lanterns and kids drawings and

crafts). The kitchen preparations include preparing Moonet Ramadan  مونة رمضان which includes buying a large amount of nuts (especially walnuts and pistachios) and dried Fruits (dates and dried Apricots). Monet Ramadan also includes lentils, bulgur and Freekeh (green wheat). We also stock up on the Ramadan beverages’ ingredients such as Qamar El Deen قمر الدين sheets as it is the must have beverage in Ramadan, as well as Irqsoos عرق سوس (licorice) and Tamerhindi تمر هندي (Tamarind) that make up the delicious selection of Ramadan Beverages. Once the ingredients are purchased, we would prepare the ones that need preparation such as the different types of pickles which require time to be ready for consumption. We would also prepare a lot of Samboosik – although samboosik is a new addition to the Jordanian Iftar menu, but nowadays we make it in large quantities with a variety of fillings (cheese, meat, chicken, vegetables or potato) and would then freeze them ready to defrost and fry daily for Iftar. In the old days my grandma used to even make large amount of sugar syrup to consume during Ramadan on a daily basis.All these preparations and lots more are done in advance so we can enjoy quality family time and have time to do our religious rituals during Ramadan.”

Yes, like most Levantine tables, the Jordanian table is one that is always rich with varieties and Ramadan Iftars are just another opportunity to showcase and indulge in these varieties. There is no way that you will sit to a Jordanian meal that offers just one dish or two, it is in fact culturally frowned upon to invite guests to a mediocre table that offers a dish or two. In Jordan – drawing from the Bedouin virtue of Karam al Diyafeh كرم الضيافة (generous hospitality) – you must always offer the best, always a variety of choices even if that means offering all that you have.

What the Jordanians Eat for Iftar

“During Ramadan, we concentrate on having soups, salads, beverages and stews as these are the foods that supply the fasting body with the necessary nutrients and a sufficient amount of liquid to compensate for what is lost during the fast.” says Rawan and details as follows: “We break our fast with dates and water, then we go for the soup, Lentil or Freekeh Soup are the most popular choices. We then have the salad with one or two kinds of samboosik and finally the main course, all the while sipping on the Ramadan beverages and indulging in a variety of pickles and olives. After Iftar we Drink either red tea or Arabic Coffee, then head to pray Taraweeh. When we return from Taraweeh prayer we have the dessert. There is a wide variety of desserts, but Qatayef remains the most popular, especially that it is only made during Ramadan, so in a way Ramadan means Qataief. Other kinds of desserts that we like to serve during Ramadan are Bahteh, which is a rice pudding made using homemade starch. There is also Zalabya, which in Jordan is a scented dough that is fried and then drenched in Sugar Syrup. In the old days, Lazaggeiat was the popular traditional dessert and it is a dough made without yeast, baked over Saj and then served with Samen Baladi (traditional home-made clarified Butter) and drenched in sugar syrup.”

Samen Baladi سمن بلدي is a type of clarified butter and every family usually has their own recipe for Samen. While in Jordan samen is available in most stores, many people would buy it from Bedouin families known for it. This samen is used in the making of desserts, mansaf and traditionally used for flavouring foods as well as for frying nuts which are then sprinkled over the food.

Homemade starch is usually extracted from wheat. The wheat is soaked in water for a while and then rubbed between the palms until all the starch is released. It is then left for the starch to separate from the liquid and this starch will then be used in the making of desserts. It is believed to be better tasting than the store-bought variety.

In Jordan there are two dishes that are a must. One is fool  فول which is brown fava beans with tomatoes, and the other is one of different kinds of Jordanian omelets. People also serve some readily available pantry foods such as labneh لبنة , white cheese جبنة بيضاء , olives, halawa  حلاوة  بالسمن البلدي with Samen Balady, zaatar زعتر , galaiet bandora قلاية بندورة (a tomato stir fry), date molasses with tahini طحينة بدبس الرمان , Qamar El Deen paste, Jameed paste with some olive oil جميد بزيت الزيتون …etc. which are all eaten with freshly baked bread and of course dates and water are essential. After devouring Sohour, people usually pray Al-fajer prayer and then sleep.

A Ramadan Tradition Unique to Jordan

While chatting with Rawan, I was surprised to know that there is a Jordanian Ramadan tradition that I am not familiar with! She said:“One of the most important Jordanian Ramadan traditions is that on the first day of Ramadan, where we should cook either white or green stews. This tradition has a beautiful meaning: Both white and green represent Muslims, since green is the color of Muslims’ clothes in heaven and white is the most mentioned color in Al-Quran Al-Kareem. That is besides the fact that these two colours are usually comforting to the eye, and are generally associated with peace and goodness. So my family, for instance, usually cooks Mansaf (the most Popular Jordanian Dish, that is mainly white) and on the side, we serve spring onions, rocket Salad, and sliced white onions, which are green and white, and also tend to bring out the flavour of the Mansaf.” 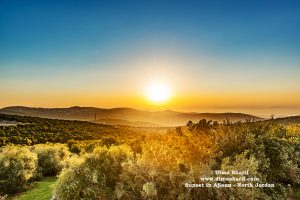 When I asked Rawan whether the Jordanians prefer eating at home or restaurants she explained that while the concentration of the food of choice during Ramadan is on Traditional cuisine, many Jordanians are open to cooking recipes from other cuisines, however, they prefer recipes that they have already tried and tested as opposed to trying out a completely new recipe. Most people, as everywhere else, would stay away from junk food as it has no essential nutrients and is believed to make fasting harder the next day and induce thirst. In the same effect, most people prefer home-cooked meals for Iftar, either at home or a close relative’s, but are also keen on going to restaurants that are known for offering good food and varieties of it. After Iftar, most people will either hang out in cafes and restaurants or visit family and friends.

Ramadan in Jordan is beautiful, worth exploring and even visiting during the month if you are keen on unique culinary and cultural experiences.